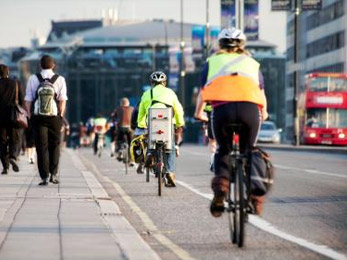 The growing influx of cyclists on roads in the UK is becoming a serious threat to insurance premium costs for road hauliers and couriers, despite lanes being specifically made for bicycle transportation. Inevitably bike and truck are going to ride side by side at some point. Insurance is a very black and white industry and very rarely are both parties right at the same time which leads to a financial pay out by one or t'other. To see what other say about Evans and Lewis have a look at trust pilot.  Many insurance agencies are reporting an increase in cyclist claims against other vehicles.

By far the biggest and most serious collisions are between Heavy goods vehicles and any other party, aside from M25 vehicle pile ups just outside London, a HGV and even an LGV has such a heavy load and an inefficient stopping distance that the force is multiplied and the damage once hitting an object can be horrific. Learn more about Heavy Goods vehicle policies. While of course many will feel more aggrieved for a cyclist as the result could be death, it is not always the HGV driver's fault, that said, claims are escalating. Get expert advice and information about tipping trucks .Tippers have had increasing claims in the inner cities.

Are No Win No Fee Cyclist Claims Having An Impact On HGV Insurance London Policy Premiums?

If you take a brief glance at the cyclist insurance offers online you'll see a great many of the policies are being promoted with the promise of 'no win no fee.' While it is important to consider that unless the person is a driver or passenger inside a motor vehicle, if a cyclist is aggrieved then it is the result of being hit as merely a body on a bike with very little protection.  Increase your understanding and have the small print explained. There are a growing number of cyclists in London so this a growing problem. Cameras can help reduce costs. However starting out as David and always facing Goliath is seemingly a situation that has to change if insurance premiums are going to normalise in respect to cyclist accident claims.

A bike rider should feel safe to be on the road even if the distance between cyclist and an HGV is only arms length. Indeed a lot of accidents are the result of an HGV or LGV Large Goods Vehicle cutting up a cyclist as the junction approaches. There is also a lot of human error involved on both the cyclist and HGV driver's part. There are laws to ensure driver fatigue is lessened, but load balance and reliance of third party applications for directions can also distract and cause momentary lapses in driving judgement.

At least the public are openly talking about bicycle insurance. For decades the only people to pay road taxes have been those driving vehicles, the bicycle rider has had no direct road tax to pay at all. Despite making use of traffic lights, enjoying level and kept roads and the same rights as other road users. Now there is serious talk about licensing bikes with number plates, levying tax for bicycle users on roads but at the same time using this new found income to drive up road safety for all concerned. Brexit is causing changes to the European job market and wages will alter soon. is a Bicycles on the road present one major problem for both vehicles and the cyclist. Over the next few years HGVs will become more and more driverless. They are small, can be unseen, can weave between vehicles and hide in blind spots. On top of which they are the most vulnerable. Nowadays  any driver policies mean agency drivers are used and some are less well trained than full timers. At least motorbikes have substantial braking systems, cover limbs during collision and appropriate attire enforced, cyclists may simply be out for 20 minutes to the shop or cycling to work without as much a thought about their own safety - although this is changing fast with helmets being de rigueur.

And with it, so too the cost of premiums afforded to HGV drivers, HGV prices for insurance policies are not getting any cheaper for there being more cyclists, more no win no fee claims assistance. However it is far too easy to protect the motor trade industry and suggest cyclists should stick to designated areas. The fact remains that a cyclist is more likely to collide and die with an HGV than any other vehicle. 23% of UK collisions between a HGV and cyclist result in a death, with HGVs only accounting for 5% of road traffic countrywide. This is an issue. In inner cities alone, HGVs may only cover less than 5% of total road capacity at any one time yet are more prone to incidences of causing death after collision. In the main because of the sheer amount of weight and power behind the driving seat and the fact stopping distance and reactionary swerve can be so much slower than any other vehicle. Often enough the young drivers or older drivers are considered more of a risk. HGVs recorded as colliding with cyclists in London during 2015, resulted in 78% of all known cycling fatalities that year.

If you are running trucks in inner cities it is advisable to get several quotes. Clearly cyclist's claims against the motor trade industry business and its drivers are having a slight impact on insurance policy prices for HGVs.   To see what available to cover a lorry in London or Birmingham  go to our homepage. The industry as a whole has to come up with ways to ensure that responsibility for such incidents is taken on board and learned from, so as to ensure accidents are lessened, monthly premiums kept affordable and not affected by inefficient driving practices. How this should be achieved is of course a concern and should be a work in progress for all concerned, both cyclists, government and the the motor trade industry.